File this one under "never did this before". CCW and Brodey Francis came to us to build a "virtual strong man" gag for Toyota. Rather than swinging a sledgehammer and ringing a bell, guests at this touring Toyota activation are asked to smash a guitar à la Pete Townsend, to test their rock and roll muscle. I'll update with a picture from one of the gigs themselves, but I wanted to show you all what we built in the shop. Our resident Genius Eric Simpson created an interactive LED rock-o-meter from scratch, including pressure sensors, climbing LED circuit boards, and even audio triggers that play increasingly complicated guitar riffs depending on how high up the guitar neck you climb. Super proud of Eric for figuring this stuff out - I could spend a lifetime trying and would never hit the Rock God status he achieved.

Although GNR and LCD Soundsystem and a bunch of DJs were at the top of the bill this year, both weekends were pretty much owned by Sia. Huge press, rave reviews, massive audience, and our favorite 14 year old dancer Maddie from Dance Moms performing along side of Her Sia-ness. Seibo brought us out to do projection mapping on her backdrop. Super cool concept - Sia does not like to be lit (or seen), so production designer Michael Keeling designed projection to do most of the lighting. Yes we left Sia in dark "doors" within the projection, often. And when we didn't anti-light her, she hid behind the bangs of her wigs. Smart girl - write hit songs for others and get paid massively, have a few hits yourself for fun touring stories, and still be able to sit in a Pete's without anyone bugging you.

SPECIAL MID-MONTH POSTING! We've always said our greatest accomplishments at ShowPro are the families that we've raised while working here. Imagine this - Melissa/Ligo's boy Sol and my/Cheryl's son Charlie are heading off to college in the fall. Unreal - we're still trying to figure out how that happened so quickly. Sol is going to study business (and yeah, some theater tech) at DePaul in Chicago. Charlie is studying Music Industry and songwriting at USC Thornton. Walking Miracles... So So proud. Now we need you all to send us gigs so we can pay for this!

I don't need to tell you how excited we were to get a high profile gig at South by Southwest this year. Trust me, Cheryl and I would have been there either way, but it was cool to do something really creative with a new client in between acting like teenagers seeing bands all day and all night. Our friend Erika Urquiza is working with a new super-groovy agency in New York called A2G. They do mad stuff - all experiential events and spectacles. They brought us out to Austin to install a massive touchscreen. Relevant but tasteful imagery from their client The Gap was projected on a 12' x 32' screen and as guests interacted with the content, they produced particle and other effects. Even the bands playing in the room effected the projection. Extra Bonus - Ryan Adams and Avett Brothers played the first night. SXSW sawed us in half this year - just the way we like it.

It's awards season so that means two-for-one. We worked on the big Recording Academy Grammy post party at the convention center, as well as the Sequoia-produced Governors Ball for the Oscars. Such a great honor to be involved with both. Seriously, we feel super lucky that we continue to get invited back to work on two of the premier special events in the world. Grammys had a CandyLand type feel - Like Katy Perry CandyLand - kind of psychedelic and really fun for guests. Oscars was gorgeous and subdued and masculine and classy. I don't have a shot of our Oscars room and it's the last day of the month so rather than blow the post, I've included a shot of the broadcast stage. That thing was gorgeous -  It's all about content - You can have massive projection or LED, but without stellar content, it's just gear. Here's to the creative types!!

Death, Dissolution and Rebirth with Movie Stars and Snow 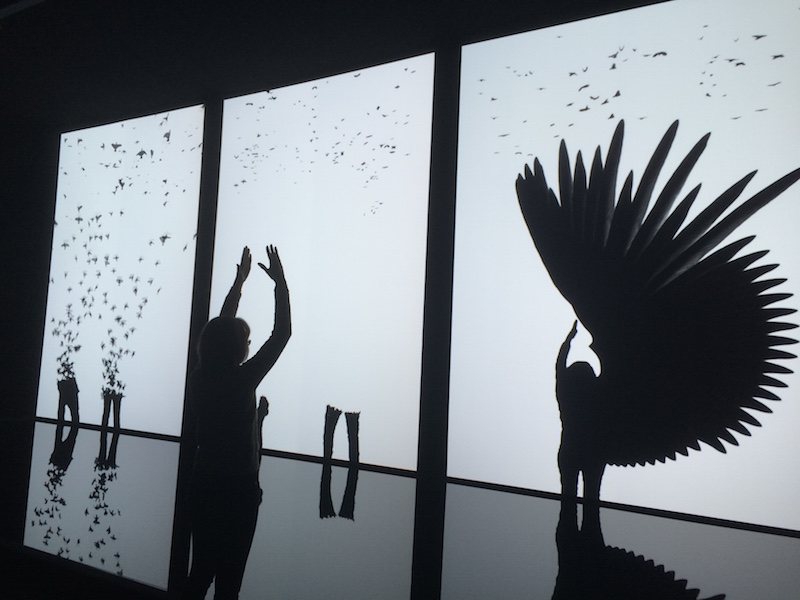 Visual Artist Chris Milk is touring the world with a large scale interactive Triptych, which has stopped at the Sundance Film Festival this week. Don't worry, I had to look up Triptych, too. It's a story of birth, death and transfiguration realized on three massive projection screens. We did the lighting, video and audio installation for producer Mitch Kirsch at Planet Events who rep'ed Milk and his team. This is three big screens with a shallow reflecting pool in front of them. Guests come up to each of the screens and their shadows are digitally captured and reprojected. Milk's software then paints the shadows with 3D models of birds growing, then deconstructing, then experiencing rebirth. Really Cool. Massive amounts of snow up at Sundance and cold, too, which makes a visit to this installation even more Triptychy.

Local madman and Kanye West Lighting Designer John McGuire was tapped by Audemars Piguet the French Luxury Watchmaker to turn 2 Rodeo into a winter wonderland. He did. Well, we did with him. Insane design that had us flying versatubes over the uber-fancy guests, with fire pits and hot chocolate and baked brie and snow everywhere. Seemed ambitious and it was - Required installation over two nights, then striking everything to restore the street for tourists each day, before the show. The final re-installation happened 2 hours before doors. It looked trippy as hell which is exactly what a luxury french watchmaker should be shooting for as far as I'm concerned.


Ain't gonna happen, fellas. This is Lily Aldridge - She's a Victoria's Secret Angel which means she's like Charlie's favorite Angel. She's standing next to a 2 million dollar bra made of diamonds. VS brought us in to do a moving step and repeat backdrop for a press event. Pretty good idea actually as every photo of Lily is different because of the moving fireworks visuals behind her. We brought an LED wall in to the VS store on the third street promenade - no easy task. But it went up quickly and the client was happy and the press didn't complain too too much. I'm a Dodger fan, but I no longer hate the Angels for some reason.

Let's See - October 2015 brought us a big Viacom integrated marketing and concert event, an automotive tour, gigs with the New York Times and BET, outfitting a touring bus for our Jordanah friends and a bunch more. However, October 1995 was me and my mullet rockin' the ultimate partnership with my beautiful wife Cheryl, in New Jersey. Twenty years ago today, Oct. 22, we got married. Imagine that - we've had a couple of great gigs ourselves over the last two decades including a big one in 1997 (Charlie) and another in 2000 (Olivia). Maybe in 20 more years the mullet and the big Jersey hair will be back in style??