March came in like a Snoop Lion and dealt us some pretty great gigs. A lot of them. Here are five that stood out: Khalid doing a private event for Spotify at ROW downtown thanks to our pals at Crown and Conquer; new strategic partners, London-based Lively brought us to the Hotel del Coronado to rock some corporate meeting stuff with a big-ole LED screen; we did our first PTTOW gig (think inspired Ted Talks with a purpose); The Gathery of Girlboss fame included us on a Soul Cycle gig at Milk Studios; We lit an exhibit at the TV museum about Bob Fosse with the loyal and lovely David Rodgers; then it's all capped off with a premier for Epix' new show called PUNK about the early years. Best line from the panel that spoke before the film - Marky Ramone to Johnny Rotten: "F You, people only came to Sex Pistols shows to see Sid Vicious, not you."

Erick Weiss had lunch with me about 3 weeks ago and told me about this mad gig that was coming down the pike. French designers TUFF were working with awesome film producer/man Lawrence Bender to do a big old show for the UCLA Institute of Environmental Sustainability. The show was to be called "Hollywood for Science." Perfect timing - right on top of The Grammys and Oscars, and losing our minds - Fuck it, we dove in. A fortnight later we wrapped an amazingly unique event, featuring Lauryn Hill and Cee Lo, and a bunch of compelling and important art and some supermodels and a famous quarterback married to one of said-supermodels. Wicked projection from David Corwin, matched with a Triptych LED wall set, David Flad getting his freak on, and Eric's arena-sized PA in a 15,000 tent. Special thanks to Zuk for TD'ing and not QuiT'ing, and for sure to Adam Rosen who begged me not to take the gig, but then jumped in and dealt with it after I did. It's Science, guys, believe it!

January is always so busy for us, mostly because we're doing lots-o-gigs at the same time we're prepping for awards show season. Not to mention the January awards shows! Aaahh Yeeeah... Let's do this in one, long run-on sentence: Super fun times supporting Sequoia with the annual G'Day LA show at 3 Labs featuring Margot Robbie, as we move to Milk Studios to support Fashion Photographer Adam Franzino in his first live exhibit, then run over to the Chateau with d_rodgers for Golden Globes joy, but wait there's more – Dr. Jart with Brodey Francis did a wild one at Racer's Edge where the press mixed cosmetics with Go Karts, then BAM, our plane got hit by lightning heading up to SFO yesterday. Don't cry because it's over; Smile because it happened!

YLS had us back to the Thomas and Mack Arena in Vegas this year, for the NFR Championship. Rodeo is cool - For millions of people, it's such a deep and definable and important culture in our country. Yes we're all a bit conflicted about how happy the animals are, but I fixed all of that by putting some slo-mo video of happy cows in a field at the end of the piece. Now if we can just get the politics moving a bit more to the center, we'll be rockin'. Ligo spends two weeks out there every year, and for that we are forever indebted. Thank you Ligo, Thank you Rank and File for the great tune, and thank you Jesus.

Pre-Thanksgiving treats this week with a couple of happening hip hop shows and a press event for tough guys. Producer Jen Green invited us to her Cardi B show for Fashion Nova. CB dropped her brand new clothing line, online, at Midnight. She did a live performance at the same time to celebrate and promote. Our show was live streamed on the Fashion Nova website so fans could see Cardi and could buy her clothes. We also had a great one with new client Crown and Conquer at the Theater at the Ace Hotel downtown, the 2018 Spotify Secret Genius show. This is Spotify's mission to remain dedicated to music's creator community including songwriters, producers, engineers, etc. Gorgeous theater, great new client, great acts. Look for the scary pic of the UFC fight press conf we did - Oscar de la Hoya is getting in to UFC and we're down. With all of it.

Dierks and The Great Grammy Museum 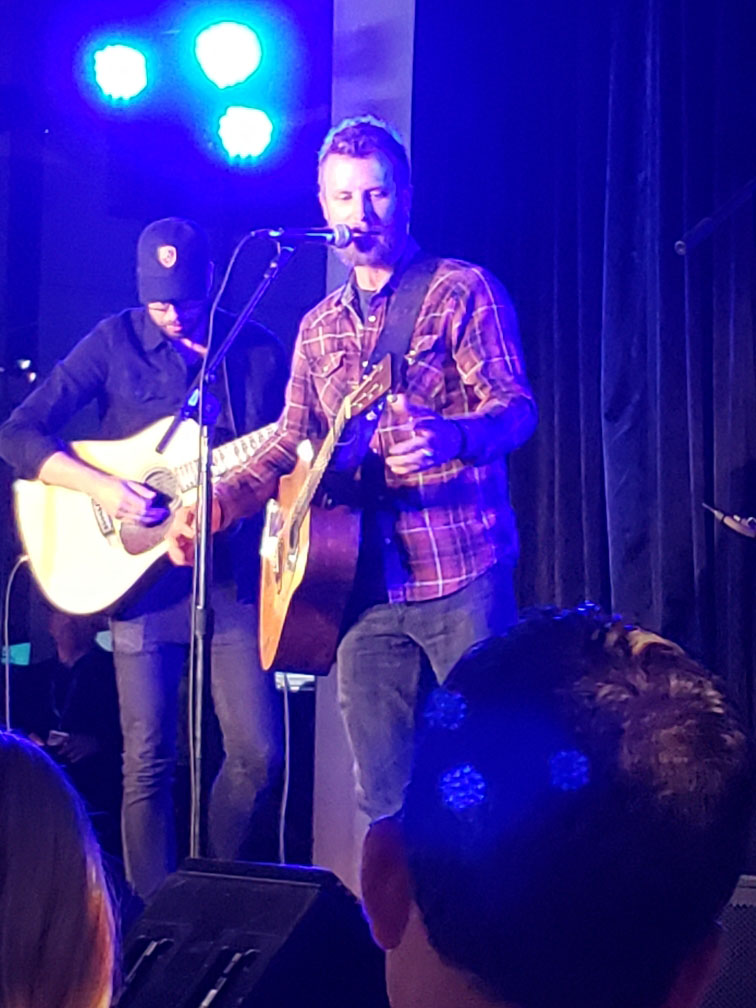 Dierks Bentley played an intimate show for 200 last week, in honor of the Grammy Museum's Jane Ortner Education Award. This is an award that is given to an outstanding teacher who incorporates music into non-musical classrooms to engage and encourage students to explore history and their creativity. Lois MacMillan of Grants Pass, Oregon received the honor after creating a six-lesson unit based on the music of Lin-Manuel Miranda's Broadway hit, Hamilton, for her 8th grade history class. We had the opportunity to contribute equipment and support for the event. A sweet mix of philanthropy and Bro Country, huh?

Not a lot to say – more to see. Again our pals at Sequoia came up with a completely new look for a gig they've been doing for over 20 years. Word to Chris Greulach for rocking this one from Blinky LED balls to massive outdoor area that looked so good, to pin spots on six million tables - gorgeous. And that's a lotta circuits, Ligo – Dang, nice. Excellent gig. 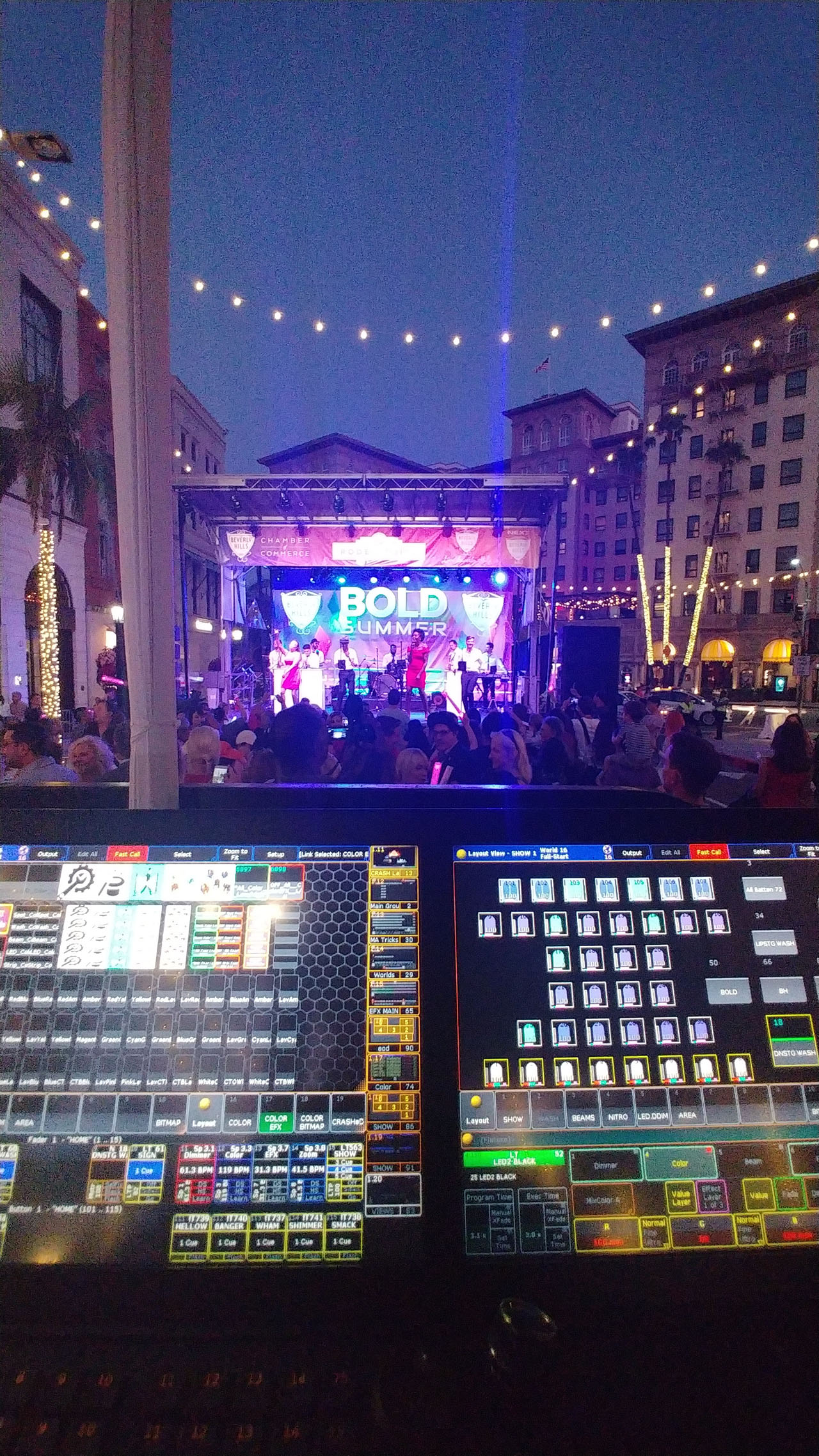 It ain't summer if I don't post at least one outdoor concert on a mobile stage. AgenC included us in a show on Rodeo Drive itself. We've done a bunch of these where the street is shut down, and we do a show. The crew has learned by now how to reply to the ceaseless question from tourists – "What's happening here?"Their reply - "we're shooting a mayonnaise commercial". That shuts 'em down every time. The great Anthony Wayne programmed the lighting and made our local street fair look like a Foo Fighters stadium show.

ROCK FULLY for the rest of your summer, y'all!

Our new Global Events Director Jeff Rudner is working on some amazing gigs supporting Formula E. These are Formula 1-type cars that are all electric, and go 200 mph! We will be working on races all over the world, and kicked off the relationship with a 2.1 mile race through the streets of Brooklyn. We provided all aspects of production for the VIP Emotion Club and some related parties and activations on site. What an incredible experience working directly with the Formula E folks who are this massively talented group from all over the globe. It was truly electric seeing the races but also turning the Brooklyn Cruise Terminal in to a unique oasis for 1200 race fans. Bonus for me as I brought Cheryl along, and we got to see Bruce on Broadway one night. Concrete Jungle where Dreams are Made, indeed - So excited for Europe, Africa, Asia and South and North America next season!

The new disrupted music industry finds a lot of big acts taking private corporate gigs to spread the word and fatten the brokerage accounts. Sounds good to me. These partnerships between brands and bands probably sound distasteful to all of my old stand-out rock and roll friends, but honestly it's pretty great. There's magic happening out there, and we love it when we get to be involved. This month we hung with John Legend on an Air BnB show, celebrated James Harden the new NBA MVP, at the elementary school he attended in LA with the Boss Rick Ross and Famous Dex, We did a big fundraiser for Chrysalis, who finds jobs for those in need with R.LUM.R and Jamie Foxx, and a whole lot more... Big month for tech with E3 gigs, and even an old-school automotive tour of the east and west coasts. Summertime, and the livin' is easy... 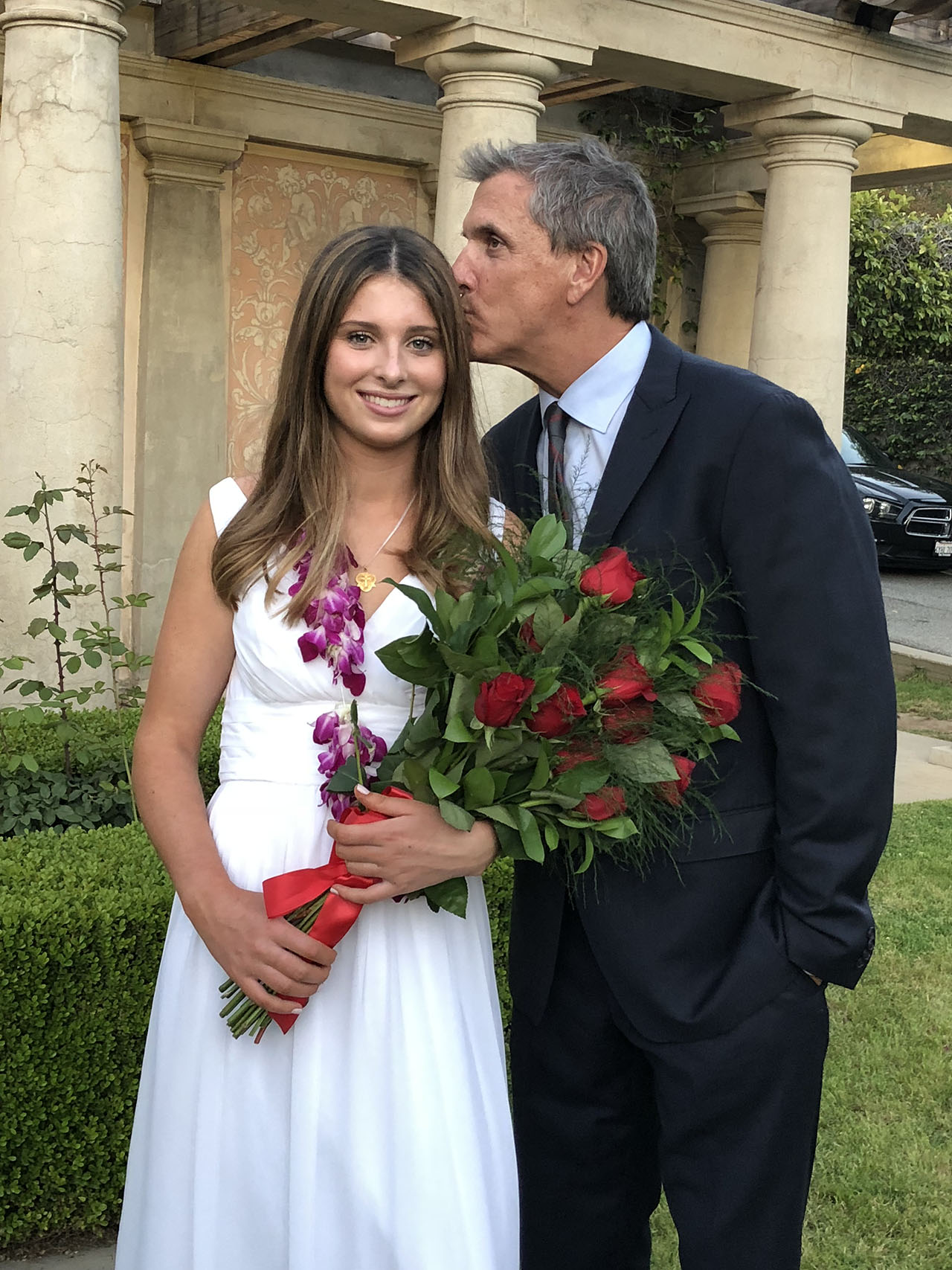 So I write about all of these fun gigs every month, and yes they are fun and they're important to me, but I pound out these gigs to pay the bills and raise a cute family. Mission Accomplished, Homeys. At least so far... Olivia graduated from Mayfield Senior School and is Wisconsin-bound in August. That's all folks - Both kids in college, we out. JK - although Cheryl did celebrate Olivia's graduation party as being her retirement party, too... What an amazing trip it's been - can't wait to see what comes next. Young parents - PLEASE take massive amounts of video at every age... Thanks for indulging me.